I don't go to movies made from books I love

You gotta read this

11 Authors Who Hated the Movie Versions of Their Books 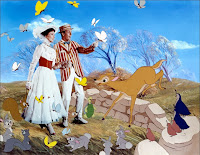 Read the full text here: http://www.mentalfloss.com/blogs/archives/131167#ixzz1yuoFcdcY
--brought to you by mental_floss!


I had a mini similar experience locally when a camera buff 'friend' got a 'producer' interested in one of my stories.I was kinda horrified at the changes made. I have come to realize that writing a story is different from writing for a movie. Some of the things that work in words alone don't work as drama. Hence " Cut to the chase" "Put in a fight scene" "More steam in the love scenes" etc.

I was shown the script from my story, but it was mere courtesy, the producer nodded politely at my suggestions and knew he didn't intend to listen to anything I said. I was present at the first auditioning session, and that was the end of my involvement .The scenes were shot and I think it was edited, and never went further. I never found out why, and never saw the completed thing although my 'friend' kept promising to send me a dvd copy. But what could I expect from a movie titled 'Goathead'!!!!!!!!!!!by the producer

That was not a good experience. I was sent a contract which offered me J$100 upfront and I can't recall what percentage. AMATEURS !!!

On another occasion I was paid to write a script from scratch. This went much better and I think it would have worked, but it wasn't taken any further by the person who commissioned it. Ah well!!

check my ebook My darling You at  http://www.amazon.com/dp/B007U78HEC