"My mother was making me a dress. All through the month of November I would come from school and find her in the kitchen, surrounded by cut-up red velvet and scraps of tissue-paper pattern. She worked at an old treadle machine pushed up against the window to get the light, and also to let her look out, past the stubble fields and bare vegetable garden, to see who went by on the road. There was seldom anybody to see.
The red velvet material was hard to work with, it pulled, and the style my mother had chosen was not easy either. She was not really a good sewer. She liked to make things; that is different.
Whenever she could she tried to skip basting and pressing and she took no pride in the fine points of tailoring, the finishing of buttonholes and the overcasting of seams as, for instance, my aunt and my grandmother did."

This story by Alice Munroe, recipient of the 2013 Nobel Prize in literature, struck strong memory chords for me. My mother also sewed my clothes during my early to teen years.She used what may be the first Singer machine ever made. I don't know where she learned to sew but she certainly took no pride in the finishing process and the finer points of dressmaking. Once the dress went over my head and fell to a certain length she was satisfied. 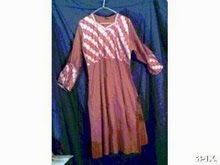 This wasn’t so bad until my puberty years when I started growing breasts and hips which made it necessary for the cloth to  be cut a certain way to fit my expanding curves. She had a few mysterious phrases which I still remember. One was 'cutting on the bias' and the favourite when fitting me – 'las it off'.  My mother was a creole speaker, and I never did find out exactly what 'las it off' meant .She would use it whenever the bust part of the dress didn't fit. The darts on either side which were supposed to allow for growing breasts were never the same height or length, and never fit, being either too tight or too loose. So too the darts from the waist down which were supposed to allow for my new curves. They always ended in a pucker and never looked right. She would tug at the cloth and say she could fix it – she would just 'las it off'. Eventually, I gathered it meant tapering off the dart to prevent the pucker, but I could be wrong. Invariably, 'las it off'  never really worked.

But, she meant well. We didn't have money to buy readymade clothing or pay dressmakers, and that was a big part of the problem. Once, she even made me a bathing suit for a school picnic – these many years later I still cringe at that memory. Perhaps one day I will write a story about it and get that out of my system.
Another post I will tell you how this 'las it off' mentality still affects our not very well trained workmen in the building industry in particular.